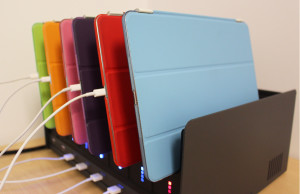 iPads, one option among speech-generating devices that aid communication, charge at the Hussman Institute.

Minimally-verbal school-age children with autism made significant gains in the frequency and variety of their speech by participating in a naturalistic intervention only two or three hours per week for 24 weeks. Children that used a Speech-Generating Device (SGD) as part of the intervention saw greater gains in speech than those that did not, and the earlier the SGD was introduced, the greater the progress. SGDs are one type of alternative or augmentative communication (AAC) tool.

Remarkably, all children in the study had already been participating in some form of speech intervention for at least two years, and still saw rapid gains. In addition, these children were 5 to 8 years old when they significantly improved their verbal output.

“There’s this idea that once you hit that age 5, if you haven’t developed meaningful speech by then, the chances of you doing that—not to say that you can’t—significantly drop off,” said Ashlyn Smith, associate clinical researcher at the Hussman Institute for Autism. “This study is really showing that language can continue to develop even past where you typically think it would.”

The research team—Connie Kasari at University of California at Los Angeles and colleagues at Vanderbilt University (Nashville, TN) and Kennedy Krieger Institute (Baltimore, MD)—used an adaptive approach to measure the efficacy of a variety of treatment paradigms in minimally-verbal children with autism. All children experienced two forms of naturalistic treatment: Joint Attention Symbolic Play Engagement and Regulation (JASPER) and Enhanced Milieu Teaching (EMT). JASPER seeks to increase interaction between an adult and child by practicing play skills and joint attention in a play-based context. JASPER is primarily focused on developing pre-speech interactions such as gestures. EMT employs modeling and prompting to develop practical spoken language.

“JASPER and EMT both touch on improving behaviors that are known to be affected in individuals with autism,” such as joint attention skills, said Smith. For all children, “language develops most naturally in the context of a social interaction,” she added, so creating a social context for learning language enhances its acquisition, and provides the bonus of giving children with autism opportunities to practice their social skills. Smith uses aspects of both JASPER and EMT in her own research.

“This is very new. This study is groundbreaking in that respect,” said Smith, referring to the adaptive experimental design, known as a “sequential multiple assignment randomized trial,” or SMART.

Children who were “early responders” (who improved by 25 percent or more on at least half of the 14 measured communication traits) continued with the same treatment. Those who were “slow responders” and had not begun with an SGD were either given an SGD or provided one additional session of intervention per week (three instead of two). Slow responders who had begun with an SGD were given one additional weekly intervention session. The researchers measured the children’s communication traits again at 24 weeks. Then intervention stopped, and a follow-up measurement of communication occurred at 36 weeks.

Children who began with the SGD were speaking more by the end of the trial than those who did not. At 12 weeks, children who had used the SGD made approximately 19 more “socially communicative utterances” than their peers who did not have access to an SGD. At 24 weeks, children with an SGD had made 22 more social utterances than their non-SGD peers. “The SGD really can provide a basis from which language can develop,” said Smith. Some parents fear that an SGD will decrease the likelihood of their child ever using her own voice, but the literature shows that “it doesn’t hinder speech from developing,” said Smith. In fact, “it can be a stepping stone to speech for a lot of kids, even when you’re giving it to them at older ages.”

Interestingly, the difference in social utterances between children with and without an SGD decreased to seven from 22 after the non-intervention follow-up period, suggesting the SGD may not support maintenance as well as non-SGD intervention. “That’s one of the difficulties when you’re doing this kind of work—getting it to generalize, getting it to maintain,” said Smith. “That’s why a lot of places now are doing ‘booster sessions.’”

Importantly, the social utterances were not only requests—they were comments, as well. This study is one of the first to show that minimally-verbal children can increase their spontaneous speech for functions other than expressing basic needs. The children in the study who improved the most in non-requesting communication were those who began with the SGD.

“Commenting and other skills are going to give you many more opportunities to interact socially,” said Smith. “If all you’re doing is requesting, that really limits your opportunities for participating in a social interaction.”

In addition, this was the first study to use a combination of the naturalistic interventions JASPER and EMT to help develop children’s language abilities. Regardless of SGD use, all children improved their verbal language during the study period, even though they had already been in some sort of language intervention for at least two years and the study’s intervention sessions were at most three hours per week. That indicates that naturalistic approaches work.

Finally, the unique adaptive approach of this study revealed that slow responders who had SGDs from the beginning were speaking more by the end than slow responders who began without SGDs and were given one at the 12-week mark. This discrepancy emphasizes the importance of getting minimally-verbal children SGDs as early as possible.

“I think the main thing it’s showing is that there’s never a bad time to introduce AAC,” said Smith. “I think this study just confirms what I think people in the AAC world have known for years. This is a really well-controlled study that shows that.”