A role for the cerebellum in autism: New review synthesizes the evidence

In their new review, Dr. David Hampson, Professor of Pharmaceutical Sciences at University of Toronto, and Dr. Gene Blatt, Director of Neuroscience at the Hussman Institute for Autism, integrate a broad range of research findings to convincingly portray the cerebellum as an important player in autism. 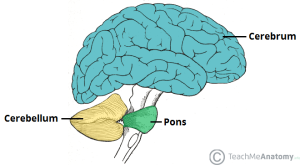 Long believed to function primarily as a regulator of movement, Hampson and Blatt discuss emerging evidence that this brain region contributes to cognitive functions such as language, visual-spatial understanding, auditory processing, verbal memory, fine motor regulation, and executive function. Studies associate injury or disease in the cerebellum with difficulties in abstract reasoning, working memory and spatial cognition, as well as language deficits and reduced verbal fluency. Some individuals in these studies also presented a flat affect and childlike behavior. Autism can present all of these characteristics.

Even in its original role as coordinator of automatic movements, the cerebellum is critical for vocal communication, difficulty with which is a core characteristic of autism. Speech relies on automatic movements of the tongue, lips, and jaws. Without proper cerebellar function, the motor planning required to produce recognizable words may be hindered.

More specifically, Hampson and Blatt cite evidence that damage to the vermis, the central portion of the cerebellum, can produce symptoms that replicate core autism characteristics. Damage to the vermis resulted in severe autism-related symptoms and challenging long-term outcomes for individuals. 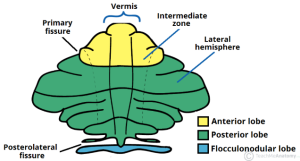 The literature also revealed genes that may affect cerebellum function. GABRB3 is a subunit of the GABAA receptor that binds GABA, a neurotransmitter that inhibits neural activity in the brain and whose dysregulation is implicated in autism. Mice that lack GABRB3 are less social, and the vermis is underdeveloped. Another study correlated the severity of vermis under-formation with repetitive behaviors and differences in spatial exploration.

Genetic work finds that two percent of autism cases contain a duplication of a section of chromosome 15, which contains GABRB3. (Two percent may not sound like much, but even among a long list of autism candidate genes, most appear in a very small percentage of individuals.) There are fewer copies of mRNA for the GABRB3 gene in postmortem tissue from the brains of individuals with autism than in controls. So, it seems plausible that GABRB3 plays some role in the development of autism, possibly by affecting the cerebellum. 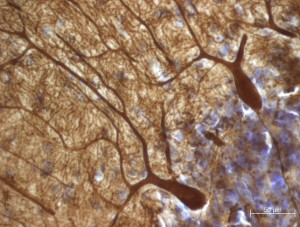 The new review also points to many studies that suggest Purkinje cells (PCs) play a role in autism. Purkinje cells are among the largest and most elaborate types of neurons. They release the neurotransmitter GABA and are located in the cerebellum. Hampson and Blatt cite postmortem studies that reported 75 percent of autism cases had fewer PCs than controls, and, in one study, the remaining PCs were 24 percent smaller.

In postmortem samples, there were lower levels of mRNA for the gene GAD67 in Purkinje cells in the cerebellar hemispheres of individuals with autism than in controls. Another study found reduced GAD67 in the vermis. The GAD67 protein converts a precursor molecule into GABA. Other research found less GAD67 in Purkinje cells in young adults with autism and increased GAD67 in nearby cerebellar interneurons. Hampson and Blatt suggested the increase might be the brain’s attempt to compensate for the loss of GAD67 in PCs.

In adults with autism, scientists found less GAD65 (a protein closely related to GAD67) in large neurons in the cerebellar output cells that are regulated, in part, by GABA. It is possible that these neurons could feed back to a brainstem area, causing neurons to send altered signals to Purkinje cells to fire excessively, and leading to the previously proposed imbalance between excitation and inhibition (TRANSLATE 2/11/2016).

There is also evidence that antibodies in the immune system may play a role in the development of autism. Antibodies are proteins that travel in the blood and then recognize and bind to specific other molecules, usually on a cell’s surface. Studies show that mothers of children with autism could pass antibodies across the placenta that affect brain development. These antibodies may bind to neurons in the cerebellum. Hampson and Blatt report from studies in the research literature that certain antibodies have been correlated with repetitive movements and differences in cognition, language development, sleep/wake cycles, and development rate—all traits that can occur in autism.

Several conditions present similar characteristics to autism and are better understood. Learning how these affect the cerebellum could inform autism research: 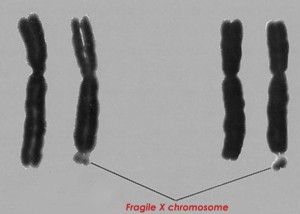 Fragile X Syndrome is a learning disability caused by having more than 200 extra repetitions of three DNA bases in the FMR1 gene. Twenty percent of people with Fragile X also have epilepsy, which is also fairly common with autism. Mouse models of Fragile X have altered versions of genes that are also candidates for affecting autism. Of 62 brain regions examined in brains affected by Fragile X, the cerebellum was one of very few that was significantly different from controls.

Tuberous Sclerosis Complex (TSC) also presents similarly to autism, and 50 percent of those with TSC are also diagnosed with autism. People with TSC may have tubers or atrophy in the cerebellum. Purkinje cells in a mouse model without the gene TSC2 (a common mutation in TSC) grew large and then self-destructed; these mice also presented autism-like behaviors. Human postmortem tissue from TSC patients also had fewer Purkinje cells. Even mice only missing one of two copies of the TSC2 gene had less-excitable Purkinje cells and presented autism traits. This evidence suggests Purkinje cells may connect TSC and autism.

Overall, a growing body of evidence suggests that the cerebellum may influence many aspects of autism. In particular, Purkinje cells seem to have a role in autism; a number of postmortem studies have found loss of these cells in a large percentage of autism cases, especially those without a known genetic cause. Crucially, PCs are the only output from the outer layer of the cerebellum and send signals to the “deep cerebellar nuclei” in the cerebellum’s center. Those nuclei then signal several regions in the forebrain, so PC signaling could conceivably have a significant effect on a variety of processing systems.

It seems clear that the cerebellum plays a role in autism, though research has yet to provide a consistent picture regarding the role of each of the cerebellar regions. The task of future research will be to further elucidate the extent of its important contributions to both motor and non-motor functions.