Praxis and Autism: Bridging the gap between intention and action

Eric, Xixi, and Sarah play Uno at the Hussman Institute.

People with autism may know exactly what they want to say, but may be unable to say it. They may know every answer on a quiz, but have only written down a few by the time the teacher collects the papers. They may know how to play a game, but sit motionless, or simply rock back and forth, when their turn comes.

Some people might blame laziness or distraction, but another challenge is often at play for these individuals: an aspect of neurology called “praxis,” or the ability to execute chains of smooth motor movements. As much as someone with autism might want to, it may seem impossible to turn a thought in his head into speech from his lips, or to convince her hand to pick up a pencil—in other words, to break free from the gap between intention and action.

A research study published in 2007 by Luigi Cattaneo and colleagues investigated praxis in typically developing children and those with autism. The researchers measured the activity of mouth muscles controlled by motor neurons as children reached for a food item, picked it up, and then brought it to their mouths. The motor neurons in the typically developing children fired while the child was still in the reaching phase and increased until the child placed the food in his mouth. In stark contrast, the same neurons in children on the spectrum showed no activity until the food item was almost touching the child’s mouth. 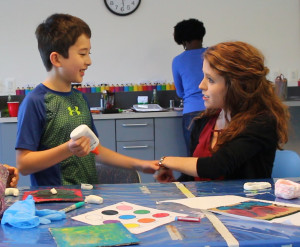 David and Colleen work on a craft project at the Hussman Institute.

Sequences of movements are controlled by “action-constrained neurons.” When a person starts to reach out for a piece of food with the intention of bringing it to her mouth, she activates neurons that control the “reach – grasp – bring to mouth” chain of movements, one of innumerable “action chains” stored in her brain’s parietal lobe. If she intends to reach out for a food item and place it in a bowl, however, a completely different set of neurons activate—despite the two action chains beginning identically.

The delay in activation of mouth muscles in Cattaneo’s study suggests that individuals with autism are not executing an action chain, but rather processing each movement sequentially. Under some conditions, it may become extremely difficult or impossible for someone with autism to intentionally control each individual step.

Self-reports from individuals with autism mirror this kind of difficulty with chained movements, and the need to execute movements as single components instead:

“To learn the technique of moving my right hand needed control over the ball and socket joint of the shoulder and then the hinge joint of my elbow and finally fold the other fingers and keep the point finger out. After that, focusing on the object which matched the word.” – Tito Mukhopadhyay

“It is hot; we should open the window… I can describe the action: I must push the button with my finger. But my hesitation grows while I try to put the sequences to go through the action. I mentally review the necessary steps, but the first one simply doesn’t come out. I’m trapped.” – Alberto Frugone

“When I was growing up, speaking was so frustrating. I could see the words in my brain, but then I realized that making my mouth move [was needed to] get those letters to come alive; they died as soon as they were born. What made me feel angry was to know that I knew exactly what I was to say and my brain was retreating in defeat.” – Jamie Burke

Maddalena Fabbri-Destro, with Cattaneo and others, followed up on Cattaneo’s 2007 study in 2009. They confirmed that children with autism break motor activities into discrete steps. The researchers asked children to reach out for a small object and place it in either a large bowl or a much smaller bowl. Previous work showed that when neurotypical individuals carry out a sequence of motor acts, the final goal of the sequence influences the characteristics of the first acts (such as speed or force). The neurotypical children followed that pattern in Fabbri-Destro’s experiment, taking longer to reach and place the object in the small bowl (a more difficult task). The children with autism also took longer to place the object in the small bowl, but the time they spent reaching for the object didn’t depend on the bowl’s size. These results indicate that children with autism process the steps of even relatively simple motor movements independently. 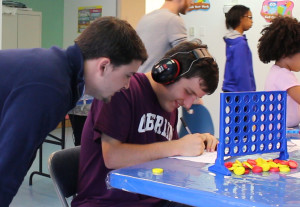 Kevin and J.P. go through the day’s schedule, and J.P. checks off completed items.

At the Hussman Institute for Autism, an important focus of research is to understand how differences in praxis affect communication and behavior, as well as how they may relate to differences in long-range brain connectivity. Dr. John P. Hussman, the executive director of the Institute, explains, “Praxis relies heavily on long-range communication between the frontal and parietal regions of the brain, and emerging research suggests that this connectivity is affected in autism. When people have difficulty with praxis, we may still be able to play to their other strengths by providing extra visual or physical information as they learn new skills.”

Other research shows that providing gentle physical cues, or “proprioceptive feedback,” can help individuals with autism complete motor movements. A tap on the shoulder or elbow is often enough to help someone translate an intent to move into physical motion. Teaching an individual to push through very mild backward pressure (“haptic resistance”) while learning a new movement can provide feedback from the limb to the brain that supports initiation and motor learning. Also, watching models and practicing action chains that come up frequently in life, such as tying shoes or locking a door, can make them easier for individuals with autism.

As autism self-advocates often emphasize, “Just because some people may be unable to speak, it doesn’t mean they have nothing to say.” There’s still a need for more research to identify and address praxis difficulties in autism. In the meantime, presuming competence and playing to strengths is always a good start.

The original research articles can be found here: