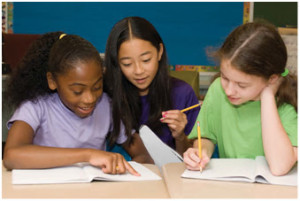 A 2014 study found that peer support for three boys with autism significantly reduced their off-task behaviors in inclusive elementary school classrooms. After training one-to-one peer supporters, the low-cost peer support protocol places minimal demands on teachers and improves the classroom environment for all learners. The study also found that all children involved in the peer support program enjoyed the experience, and teachers appreciated its feasibility and outcomes.

Supporting a boy with autism traits in an urban Pennsylvania school inspired Dr. Erin McCurdy, first author on the paper, to pursue peer support for her doctoral research. “We found that his peers were doing a better job than we were,” she said. “I just ran with it.”

McCurdy and co-author Dr. Christine Cole found that the time three boys spent engaging in off-task behaviors decreased from 69 to 13 percent (Jack, grade 3), 73 to 15 percent (Chase, grade 2), and 75 to 15 percent (Scott, grade 5) from the unsupported period to the peer-supported period. On average, the three boys all spent less time off-task than their typically developing classmates when receiving support from a peer.

Based on McCurdy’s anecdotal observations, the supporters seemed to benefit, too. “A couple times the kid with autism would look over and say, ‘You’re not doing your work, either,’” she said. “They were really a team.”

Support consisted of simple gestures that provided reminders and positive reinforcement, such as pointing at a workbook or giving a thumbs-up. Examples of typical off-task behavior from these boys included lying on the floor, playing with materials in their desks, initiating conversations irrelevant to the current task with classmates and pencil tapping, so reducing these behaviors also reduced distractions for other students.

McCurdy’s dissertation at Lehigh University (2015) extended this work by addressing off-task behavior as well as work completion and whether the children maintained their increased on-task time after the designated support period (known as “generalization”). She observed four boys with autism, three in second grade and one in first grade. The boys reduced their off-task behaviors with peer support to a similar level as in the previous study. The generalization and work completion results were mixed.

All four boys showed increased work completion with peer support: 35 to 96 percent, 64 to 87 percent, 63 to 100 percent, and 26 to 40 percent. Only one of the boys generalized his improvement in work completion beyond the supported period.

These results encourage further research into peer support programs for young children with autism. Broad conclusions shouldn’t be drawn from this work, though, because of its small sample size. Also, all of the children with autism in these studies were verbal and displayed relatively minor, non-aggressive off-task behaviors. A peer-support method might have different results with more challenging behaviors or with individuals unable to demonstrate their competence by speaking.

Now employed by the Kennedy Krieger Institute as a school psychologist at a school for children with disabilities in Baltimore City, McCurdy thinks peer support has potential for children who are more severely affected. “I think it depends on the nature of the kid. For some situations, it may be a great way to rebuild that rapport between an individual with autism and their peer,” she said. “But I think the teacher would need to be more willing to step in if they see behaviors escalating.”

Also, McCurdy’s research did not attempt to determine the function of the off-task classroom behaviors. In general, behavior has a function, such as communicating an underlying need, and a primary goal of positive behavior support is to offer individuals with autism more effective ways to meet those needs without resorting to challenging behaviors. “For the kids who are just trying to get attention, this isn’t a good intervention,” McCurdy said.  Attention from a peer as a result of a behavior would reinforce the behavior, rather than help get a student back on task.

Another direction for future research McCurdy and Cole suggested is to observe whether the peer support model increases interactions between children with autism and their typically-developing peers during non-academic times of the day, such as lunch or recess.

McCurdy and Cole also encouraged exploration of what age is the most appropriate for the peer support model.

“Between first and third grade, kids were competing to be a child’s peer buddy, which was great,” McCurdy said. “Kids raced down the hall to turn in their permission forms.”

But she didn’t see that enthusiasm with older students. For example, a fifth grader in the 2014 study expressed self-consciousness about being a peer supporter. The paper suggests emerging self-awareness may inhibit peer support’s efficacy as children age.  McCurdy suggested that perhaps children who participate in and/or observe peer support in early grades may be more comfortable with it later on.

This work in peer support provides important data and suggestions for future research that will promote inclusion of children with autism in general education classrooms.

Currently, much of the research on peer support focuses on its social benefits. That’s important, but so is the academic piece. “I feel like this is something that’s getting missed,” said McCurdy.

For parents who might want to work with their school to implement peer support for their child, McCurdy says, “I think the first thing is to build the best relationship you can with the school. If you show them you’re willing to work with them, they’ll be more willing to work with you.” And ask for changes in small increments. Parents can take heart in the fact that she noted it was surprisingly easy to get teachers on board with her research, even at a school where they didn’t know her. “They want these kids to be successful in their room, and they’re confident peers can help,” she said. “A lot of teachers signed up and said, ‘Let’s go!’”

The research articles are available here:

McCurdy E & Cole C. (2014). Use of a peer support intervention for promoting academic engagement of students with autism in general education settings. Journal of Autism and Developmental Disorders, 44:883-893.